International Day for Biological Diversity was celebrated on 22nd May at Capital Convention Center, Kohima under the theme “Biodiversity and Sustainable Tourism”. The event was organized by Nagaland State Biodiversity Board (NSBB). Shri. I.Panger, IFS,  PCCF & HoFF, Department of Environment Forests and Climate Change, was the special guest. Dignitaries from the Forest Department, Government of Nagaland, and Board Members & BMC Members were present for the celebration. Altogether, 14 schools with total no. of 600 students, 22 teacher-incharges and 7 media personnel attended the event.

Addressing the gathering, Shri. I.Panger, IFS, PCCF & HoFF, Department of Environment Forests and Climate Change, encouraged the students to become nature lovers and to be aware of the benefits through preserving and conserving natural resources. The PCCF said that the tropical deforestation may result in loss up to 15% species by the year 2020 and said that the role of forest was not only to provide resources for human survival but was vital for all round development and maintaining ecological balance. He said that it was our responsibility to preserve and protect biodiversity and reduce pressure on the biodiversity by protecting endangered species. He said that unless “we act now it may be too late for next generation to survive” and advocated that youngsters had much stake and big role to play. He challenged all the young minds to focus on conservation of the fragile biodiversity. He also said that community biodiversity conservation efforts in the State have started, citing examples like Sendenyu, Kanglatu, Dikhu green zone and Khonoma nature conservation. He expressed the hope that the International Day for Biological Diversity Celebration would be a turning point for the people to bring positive change for the next generation.

Shri.T. Lotha IFS (Retd.), Chairman Nagaland State Biodiversity Board (NSBB), delivered the keynote address on the importance of biodiversity citing that the existence of humanity depends on biodiversity. He suggested that the areas/habitats where Asian elephant, Mithun, Tragopan are found in Nagaland should be developed for ecotourism. He said for sustainable tourism, one has to ensure the optimum use  of natural resources, viability of economy and viability of stakeholders like host community.

Dr. Sapu Changkija, Member NSBB, maintained that North East India is one of 25 biodivesity hotspots in the world, adding that it possesses the richest medicinal plants, orchids, birds, snakes and the highest variety of ornamental fishes. He encouraged students to be aware of the rich biodiversity in the State, and become “nature lovers”.

Students of Vineyard School presented special number. Essay and painting competition were conducted for school children commemorating the day. Cash prizes and certificates were given to all the winners. Refreshments and seedlings were distributed to all the participants at the end of the event. 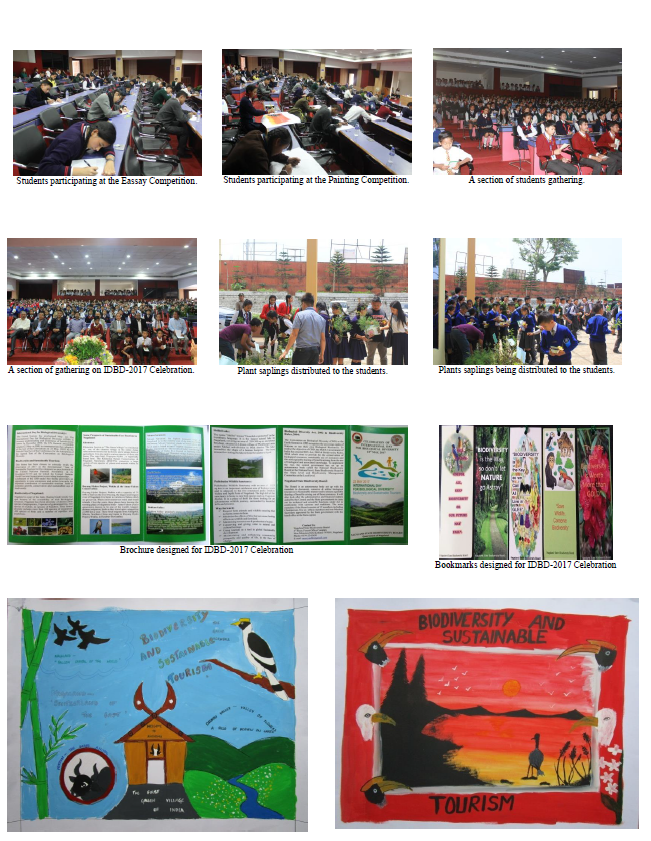