International Day for Biological Diversity-2016 was celebrated on 22nd May 2016, under the theme “Mainstreaming Biodiversity, Sustaining People and their Livelihood”. The event was organized by Nagaland State Biodiversity Board (NSBB), Department of Environment, Forests and Climate Change at Khonoma Village. The event was chaired by Shri. T. Lotha IFS (Retd.), Chairman Nagaland State Biodiversity Board (NSBB).The Chief Guest for the event was Dr. Nicky Kire, Minister of Environment, Forests and Climate Change.

The Chief Guest called upon Forest Department and State Biodiversity Board to provide guidelines and advise to any interested party in matters related to biological resources. The minister also urged the department to assist individuals so that they could document, conserve and utilize biological resources in sustainable manner. Stating that increasing human activities such as intensification of agriculture, shifting cultivation, deforestation, urbanization, hunting and poaching etc., were some of the factors that affect biodiversity in the State.

On a positive note, the minister stated that in the recent years, many villagers had taken up conservation initiatives in their community land. He also urged the tribal, farmers and cultivators to identify and go for cultivation of economically important plants that could provide handsome returns. Later, the Chief Guest released the booklet “Handbook of BMC Guidelines”.

Delivering short speech, Principal Conservator of Forest and HoFF, Shri. M.L Rao, IFS, informed that the National Biodiversity Board has agreed to provide fund for formation of Biodiversity Management Committee to 100 villages with the approval of NSBB. He stressed on the importance of protecting intellectual property right and royalty.

Dr. Sapu Changkija, Member NSBB, delivering a speech on the State bird-Tragopan, regretted over the drastic reduction in the Tragopan population and opined that hunting and deforestation (timber logging) were the major causes.

The gathering was enthralled by C.W School Khonoma. Essay and painting competition were conducted for the school children commemorating the day. Cash prizes and certificates were awarded to all the winners of the competition. 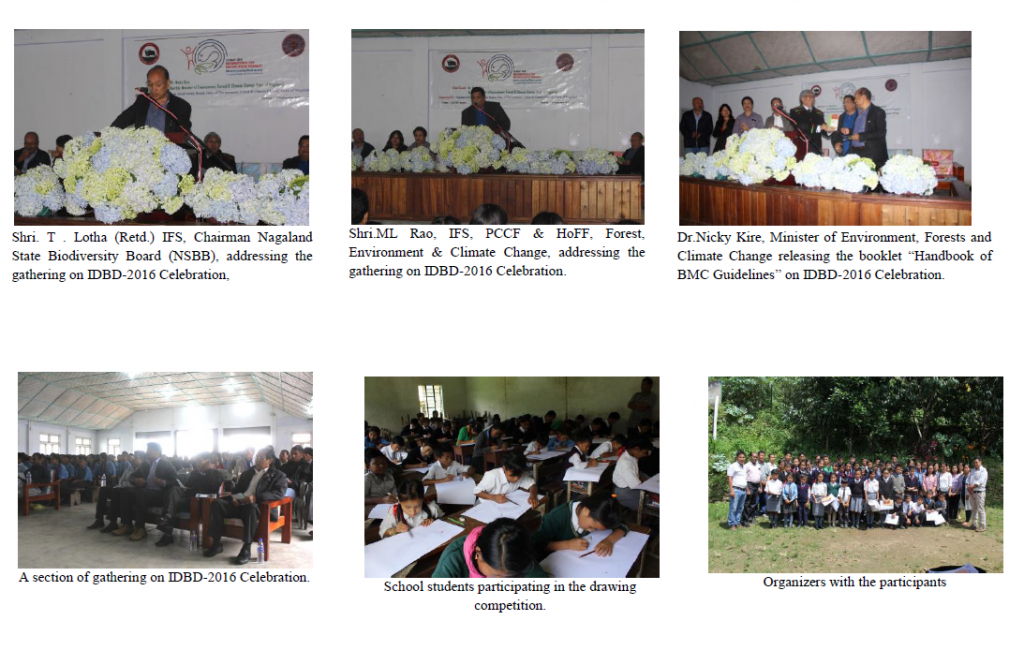